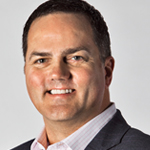 Randy Lovely was named Senior Vice President/News and Audience Development for Republic Media in Phoenix, Arizona, in February 2011. He is responsible for the strategic content and audience development for The Arizona Republic, azcentral.com and La Voz, and also serves as Gannett’s news executive for its Western properties. Previously, Randy was Vice President/News and Editor for The Arizona Republic and azcentral.com since January 2008. He came to Phoenix in 2002 as managing editor and was promoted to executive editor in 2005.

Before coming to The Republic, Randy was executive editor of The Desert Sun in Palm Springs, California. Randy began his career in 1986 as a reporter at the Sturgis (Michigan) Journal. He has worked in a variety of roles at papers in Fort Wayne, Indiana; Long Beach, California; Fort Myers, Florida; and Shreveport, Louisiana.

Randy has received Gannett’s President’s Ring for performance four times and was named the top news executive for 2010. He was honored with the Robert G. McGruder Award for Diversity Leadership in 2010 from the Associated Press Managing Editors. Lovely has a Bachelor of Applied Arts degree in journalism from Central Michigan University, which inducted him into its Journalism Hall of Fame in 2008.