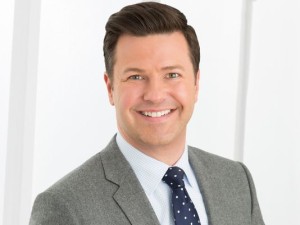 Ron has enjoyed a long and successful career as a television journalist, first starting as a general assignment reporter and weekend anchor in Clarsburg, West Virginia. Corning’s first foray into a major market was at Fox affiliate KTVI in St. Louis, Missouri, where he won an Emmy Award for Live Spot News Coverage in 1997 before joining Fox affiliate KCPQ in Seattle, Washington.

Corning entered the national arena as a news anchor on the CW’s syndicated morning talk show, The Daily Buzz from 2002 to 2004. In 2004 Corning went on to co-anchor the ABC overnight news program World News Now and ABC’s World News This Morning and was a correspondent for Good Morning America. In the New York market Corning has co-anchored mornings and evening newscasts with former Weekend Today Show anchor Jodi Applegate.

Corning was drawn to WFAA because of its reputation in Dallas and nationwide as the gold standard in television journalism. Ron was born and raised in Eastern Maine where his family still lives. Ron graduated from Wheaton College in Massachusetts in 1993 with a B.A. in history and religion.