Bruni Debuts at NYT and Talks Marriage in N.Y.

The New York Times’ newest (and first openly gay) op-ed writer, Frank Bruni, debuted today with a column about New York’s approval of marriage for same-sex couples.  His column is part of the paper’s redesign of the Sunday Review section.

In his first column, Bruni analyzed the victory for same-sex marriage in New York and worked to explain why the change happened. 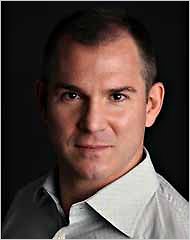 But an even bigger reason is how common it now is for Americans to realize that they know and love people who are gay. AIDS had a lot to do with that. This month is the 30th anniversary of the disease’s emergence, a ghastly dawn chronicled in the current Broadway revival of “The Normal Heart.” And it’s worth pausing to note how drastically the epidemic raised the stakes of secrecy and silence, pulling homosexuals from the shadows. If we wanted people to take up arms against a scourge associated primarily with gay men, we had to make them appreciate how many gay men they were close to.

Over the last quarter-century the love that dared not speak its name turned into a veritable motor mouth, to a point where the average American, according to an astonishing Gallup Poll last month, thinks that about 25 percent of the population is homosexual. Hardly. But that perception underscores how visible gay people have become. And familiarity changes everything.

Same-sex marriage is personal for Governor Andrew M. Cuomo, whose longtime companion, Sandra Lee, has a gay brother. It’s personal for Paul E. Singer, the most impassioned of the Republican donors. At a fund-raiser for same-sex marriage last year, he recalled leafing through the wedding album of “my son and son-in-law,” married in Massachusetts. “At the moment they are pioneers,” he said, according to a transcript, “although I felt like a loving father and father-in-law, not a pioneer, as we were looking at the pictures.”

Years ago he would quietly leave the room whenever my sexual orientation came up in a family conversation. But when he urged me to attend a Halloween party he gave for his friends last fall, he insisted I bring Tom, whom he has come to know well over the two and a half years we’ve been together. And as he introduced us to his golf partners from the country club, he said, “This is my son, Frank. And this is my other son, Tom. Or at least I think of him that way.”

Only once did he look unsettled: when he realized he hadn’t run that language by Tom. “I’m not making you uncomfortable, am I?” he asked him.

It would have been easy for Bruni to debut his column without taking on LGBT issues and talking about his life as a gay man. In some ways, the news from New York made his decision much easier. But it is a brave column and evidence of why having openly LGBT journalists on the opinion pages is so important.