Monday, October 24, 2022 (Falls Church, Virginia) – One of America’s earliest Episcopal Congregations, Virginia’s The Falls Church, will host a special – and long overdue — dialogue with Bishop Gene Robinson, the first openly LGBTQ+ bishop consecrated by The Episcopal Church as well as the Anglican Communion.

In a milestone visit of faith, justice, and reconciliation, the venerated three-century-old Episcopal congregation will open its doors, its arms, and its hearts to The Bishop Gene Robinson – and further heal the unprecedented rupture that began in 2003 when Robinson was elected bishop. The event is free and open to the media and to the public. Reservations are available here and strongly recommended since space will be limited.

What:        “Love, despite: A Conversation with Bishop Gene Robinson”
A dialogue with one of the world’s most respected religious leaders.

Where:      The Falls Church (established in 1732)
115 East Fairfax Street, Falls Church, Virginia
(At the Intersection with South Washington)

Please note that Bishop Robinson will also preach the following day, Sunday, October 30, 2022, at both the 9:00 a.m. ET and the 11:15 a.m. ET services of The Falls Church. The congregation invites the public to attend these worship services as well.

Elected and ordained New Hampshire’s 9th bishop in 2003, The Rt. Rev. Gene Robinson, was the first openly LGBTQ+ bishop consecrated in the Episcopal Church and the worldwide Anglican Communion. On the day of his ordination ceremony and on the advice of the FBI and security team, Robinson wore a bullet-proof vest discreetly under his robes to protect himself from assassination threats.

His historic election, and approval by a majority of diocesan Episcopal authorities, caused shockwaves within the Anglican Communion and began a movement of parishes voting to disaffiliate from The Episcopal Church over issues of sexuality, including The Falls Church.

Though retired in 2013 from his episcopacy, Bishop Robinson continues to serve as an inspiring symbol of progressive Christianity with his clear vision elevating the inclusion of LGBTQ+ people of faith within the church. The late South African Archbishop and Nobel Peace Prize laureate Desmond Tutu shared that vision and said, “Gene Robinson is a wonderful human being, and I am proud to belong to the same church as he.”

Background on The Falls Church

The Falls Church, located in Falls Church, Virginia – less than 9 miles from Washington, D.C. – is one of the nation’s and Virginia’s oldest communities of faith. It was established in 1732, and during the Civil War served as a hospital and stable for Union soldiers.

In 2006, The Falls Church joined other congregations and voted to leave The Episcopal Church in an act of opposition against Bishop Robinson’s ordination while arguing claims of scriptural abandonment. A fierce and lengthy legal battle with The Diocese of Virginia and The Episcopal Church ended in 2014, with the renegade congregation defeated – and the property restored to its historic roots and a more welcoming and more inclusive congregation.

Today’s congregation has grown exponentially following a mission of radical welcome and ministry to those on the margins. In 2021 The Falls Church called the first queer, married rector, The Rev. Burl Salmon, in its nearly 300-year history and has identified ministry to and with the queer faithful as one of the parish values (see Our Values).

For Interviews/Photos and Media Contact:         The Reverend Ellie Bangay
ebangay@thefallschurch.org
703-241-0003 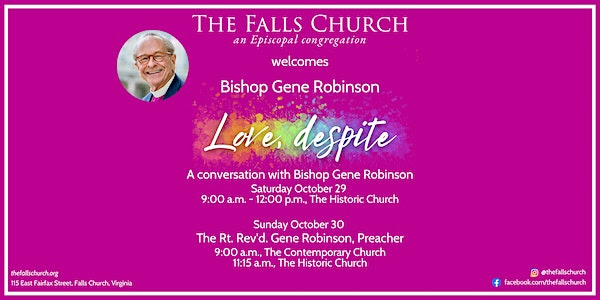