Gays and God and Obama

Before heading to the Vatican, Obama met with reporters from a number of Catholic publications–and the Washington Post–and the big gay news is just leaking out. Here’s what Obama had to say about his faith and the LGBT community. 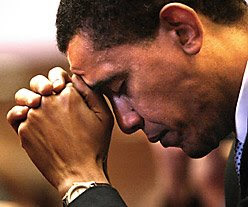 For the gay and lesbian community in this country, I think it’s clear that they feel victimized in fairly powerful ways and they’re often hurt by not just certain teachings of the Catholic Church, but the Christian faith generally. And as a Christian, I’m constantly wrestling with my faith and my solicitude and regard and concern for gays and lesbians.

Dan Gilgoff, religion writer at U.S. News and World Report, called the comment “trademark Obama, seeming to effortlessly appeal to cultural conservatives and social liberals in the same breath. Religious folks, cultural conservatives included, will appreciate that Obama takes his faith seriously enough that he’s struggling with how to reconcile it with his commitment to gays and lesbians. Social liberals and the LGBT community will appreciate that he’s unequivocal about that commitment.”

TowleRoad was cool to Obama’s comments, suggesting “I’m not sure this will be read as favorably as the blogger believes. As with most of the president’s actions and words on gay issues, the glass can just as easily be judged half full of gay power as half empty of resolve.”

But those in the meeting–including Paul Baumann, the editor of the center-left Catholic publication Commonweal–viewed the comments more favorably by suggesting that Obama, “like many of us, is still trying to sort out Christianity’s traditional condemnation of homosexuality with our experience of the goodness and faithfulness of gays and lesbians.”

These are the kinds of comments that often cause overreaction by some in the LGBT community who aren’t as comfortable with the way Christians, especially, talk about LGBT issues. There are many, though, who are in faith communities and will likely hear the comments in a very different way

Obama’s comments came in response to, from all appearances,  a “gotcha” question by Fr. Owen Kearns, publisher of the conservative National Catholic Register. According to Fr. Drew Christiansen, editor of the Jesuit-weekly America, Kearns asked about anti-Catholic comments made by the Obama administration which he attributed to Joshua Du Bois, the director of the White House Office for Faith-based and Neighborhood Initiatives.  Turns out, it wasn’t Du Bois who made the allegedly anti-Catholic comments, but instead Harry Knox, the religious liaison for the Human Rights Campaign and a member of an White House faith based advisory board.

Here’s Christiansen on the ambush question:

Journalists should know that if you are going to call an official out to his face you ought to have your facts straight. But nothing can deter the Catholic right’s idee fixe that Barack Obama is bound and determined to do the worst he can by the pro-life agenda, even when their position is shown up as empty prejudice as it was that morning.

Kerry Eleveld at The Advocate notes that Knox is in the Catholic right’s crosshairs for criticizing the Vatican’s position on decriminalizing homosexuality and the Pope’s recent comments on HIV/AIDS.