The cover story of the New York Times magazine’s “School Issue” features a a typical 13-year old–gawky and charming at the same time–with one main difference: he came out as gay in middle school. 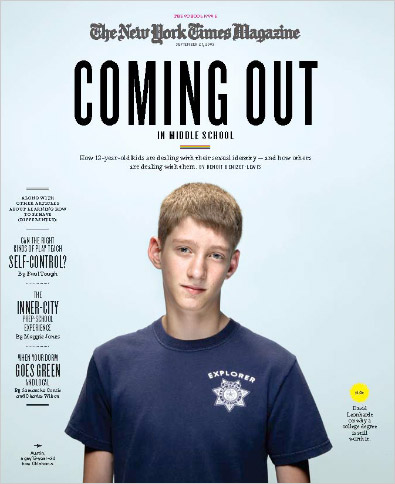 The story, which has been the buzz of Facebook and the internet, is by journalist Benoit Denizet-Lewis, a contributing writer to the NYT magazine. Denizet-Lewis became the youngest contributing writer at the NYT magazine when he was 28 and has written a number of probing, personal stories on youth culture, identity, and sex and sexuality. Formerly a senior writer at Boston Magazine and staff writer at the San Francisco Chronicle, his work has also appeared in Sports Illustrated, Details, Slate, Spin, the Advocate, Out, and others.

RE:ACT: Your New York Times magazine story about kids in middle school who come out as LGBT is getting a lot of buzz.  How did you come up with the idea for the story and how long did it take to pull it together?

BD-L: I started working on the piece about four years ago as I heard from educators and gay youth group leaders that kids were beginning to come out in middle school. I had to put the story aside to work on my book, America Anonymous, but then started reporting it again in the spring.

RE:ACT: Your story–like a lot of your work–includes your personal voice and observations. Why did you adopt that approach in this story?  Are there any pitfalls?

BD-L: The Times Magazine often pushes me to include myself more, so I do what I have to do to put food on the table. In this case, because I had worked for XY early in my career, it made sense to talk about that experience, since I’ve written a lot about gay youth. It would have been weird for me not to include that history.

RE:ACT: This is a story that could have been told by a non-LGBT journalist, but how do you feel your experience as a journalist who is openly gay shaped the story? Are you concerned about the criticism that you might have an “agenda”?

BD-L: I have only one agenda with whatever article I’m working on, and that’s to tell an accurate and interesting story. Maybe that’s two agendas? =)

RE:ACT: The kids, teachers, and parents in this story come off as very “normal” and pretty remarkable.  But things are pretty miserable for many middle school and high school kids who are LGBT.  Did you talk to people who expressed the concern that your story would lull readers into a false sense of security about LGBT kids that age?

BD-L: I think my story looks at the two realities for gay youth. The first is that life for gay teens is a lot better than it’s ever been, and many kids can come out and be accepted by their families and friends. The second is that it’s still very hard to be a gay kid, and there is way too much harassment and anti-gay bullying going on in many middle schools. So I had to write about both of those ideas, and that’s always a challenge, because that means nuance. But I love nuance. There’s very little I dislike more than journalism that eschews nuance in favor of “an angle.” I suppose it would have been easier to pick one of the two realities and write about it, but that would have been dishonest. I tried my best to write about both.

RE:ACT: There a people who suggest that stories like yours and your success as a writer and journalist illustrate there really isn’t a need for NLGJA to advocate for fair and accurate coverage of LGBT issues and on behalf of LGBT journalists.  What’s your sense about that?

BD-L: My wish is that there will come a day when NLGJA is no longer needed, although I hope we still gather once a year for a party. =)