If LGBT rights are the most important civil rights battle of the moment, why are there so few openly LGBT voices on the editorial pages of the nation’s largest newspapers? 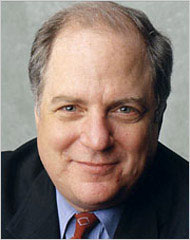 That’s one of the many fascinating questions Dan Savage asks Frank Rich in an interview that focuses on Stephen Sondheim, theatre, AIDS, and LGBT rights.

And I think it’s interesting and telling that there are no openly gay political columnists in any of the big papers: the Washington Post, the New York Times, the Wall Street Journal. During the civil rights movement—capitol “t,” capitol “c,” capitol “r,” capitol “m,” the African-American civil rights movement in the ’60s—papers began, you know, we saw the trajectory of the Bob Herberts and the Clarence Pages coming into these papers that hadn’t had prominent African-American voices. You don’t see gay people coming into prominence on the editorial pages.

Well, I think that’s a great point, and I’ll take your word for it that it’s true, and I would say—

There’s Deb Price of the Detroit News, but that’s really it.

Right, and by the way, it’s matched by the television networks.

Yeah, the only prominent gay faces on cable news are “openly closeted,” to coin a phrase.

Right, and by the way, I have to say as a Jew, I find it amazing that there is no Jewish anchorman. Barbara Walters was an anchor briefly. But on the other hand, Jews have won their civil-rights movement quite some time ago. Gay people still, as evidenced by events just in the past week, have to fight for basic equal rights under the American Constitution. That’s wrong. I also feel that not only should there be openly gay columnists in major newspapers, but that they also don’t have to just write about gay subjects either. I’d like to see a world where people can write about anything they want, regardless of what group they are part of.

Frank notes that the NYT has come a long way since it wouldn’t include the word “gay” and that in the 1980s, there were virtually no openly gay people in the NYT newsroom.

But back to Savage’s point about the lack of LGBT voices on the editorial pages of the top U.S. newspapers.  There is, of course, Jonathan Capehart on the Washington Post (and previously at the New York Daily News) editorial page.  But Capehart rarely writes signed editorials and does not have a regular column, although he’s a regular pundit on MSNBC.

It’s sometimes surprising that Andrew Sullivan doesn’t have a regular column, although blogging does seem to a better fit for his quixotic views. He does write a weekly column for the Times of London. There seems to be some people in the NYT pipeline–Adam Nagourney, Richard Berke, Frank Bruni–but no one but Capehart at the Washington Post.  Savage himself may be another obvious choice for an opinion column.  Someone like Jamie Kirchick at the New Republic is setting himself up for such a job.

Are there other LGBT voices that could find themselves on the opinion pages of the top national newspaper? Are there women who could someday replace Maureen Dowd?