Is the FBI Coming After JoeMyGod?

Anti-gay activist Peter LaBarbera says the FBI has been contacted because of threats made in the comment section of Joe Jervis’ popular JoeMyGod blog.  According to LaBarbera, Liberty Counsel contacted the FBI after commenters allegedly made terroristic threats against LaBarbera and other anti-gay and anti-same sex marriage activists, including Maggie Gallagher. 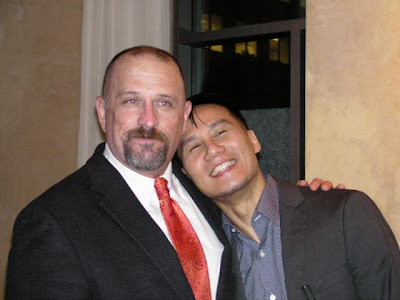 Liberty Counsel’s Director of Cultural Affairs Matt Barber–another well-known figure in the anti-gay rights movement–issued a press release confirming the FBI had been contacted and comparing the threats to the shooting at Ft. Hood.

In the wake of the horrific act of Islamic domestic terrorism at Fort Hood Texas, it has been learned that militant homosexual activists recently made similar online postings to those of Nidal Malik Hasan, threatening additional acts of terrorism against Christians.

In response to Maine’s natural marriage victory last Tuesday, “gay” activists have directly threatened to retaliate with “terrorism” and the “killing” of Christians on the popular homosexual activist “JoeMyGod” Weblog. Liberty Counsel notified the FBI which is investigating the matter. As of this morning, the offending blog entry had been removed. (captured version of post will be available at www.americansfortruth.com).

Jervis–who last night was given an award by NYC Anti-Violence Project’s Courage Awards along with Pam Spaulding, Andy Towle, and Bill Browning–pulled down the threads that contained the alleged threats, but warned his readers that the threat by LaBarbera was serious.

But please let this obvious attempt to intimidate me and my readers serve as a warning to you all. The Christianist right monitors this blog and what we all say very closely. They read every post and every comment, clearly. Please don’t post anything, even in jest, that you wouldn’t mind saying in a signed letter to your local newspaper. Nothing is truly anonymous on the internet, ever.

Courts have held that bloggers, newspapers, and other online forums are not responsible (PDF) for libelous or threatening comments made on their sites. But cases have been brought, although rarely successfully, against commenters whose identities can be determined. Especially, you must never post the home addresses or personal phone numbers of any public or private persons. Calls to action that include links, addresses, and phone numbers for government agencies, advocacy groups, and businesses are perfectly legal.

It’s hard to know whether the FBI has really been contacted, or whether they take LaBarbera’s and Liberty Counsel’s allegations seriously. And while Jervis is correct that liability for online comments is minimal, it’s worth noting that today CBS is reporting that the Justice Department subpoenaed records involving visits to Indymedia, while also issuing a gag order.

So what to make of the threats.  First, there is clearly an attempt by anti-gay activists and anti-SSM activists to paint supporters as violent, despite almost not actual documentation. Reporters need to be aware when they are being spun as part of a larger PR offensive, regardless of which side the spin is coming from.

Personally, I find some comments on Joe’s website to be over the top and unnecessarily extreme.  I also think Joe goads LaBarbera and Barbera, as well as other anti-gay activists.  But Joe–I use his first name because I’ve known Joe for a number of years, although only met him in person last year when he spoke at an NLGJA panel I moderated–is a single blogger who gets hundreds of thousands of comments a year.  There’s only so much monitoring that can take place.

Joe is also right that this appears to be an attempt to chill and intimidate journalists–especially citizen journalists–who advocate on behalf of LGBT issues.  The danger of citizen journalists is that–unlike the mainstream press and the traditional LGBT press–they don’t have the resources to defend themselves and hire attorneys should the legal threats heighten.