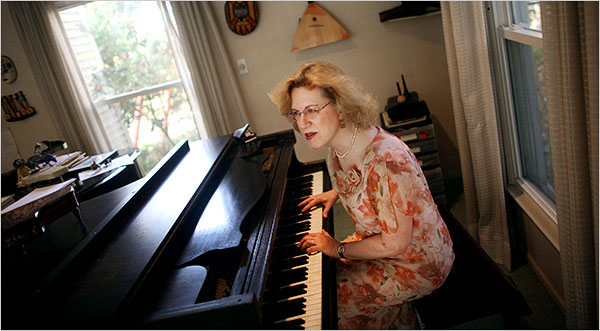 First, a story from the New York Times on Sara Davis Buechner, a classical musician who achieved significant fame as a man but found her career suffered after transitioning to being a woman.  The story was in interesting insight into Buechner’s life, but also the life of a professional pianist and teacher.

But Sara Buechner was determined to be. She said that from when she first took lessons at age 3, she knew she’d be a pianist, and not long after, realized she was meant to be a girl. (“On the playground, boys yelled ‘David’s a girl’ and I’d think, ‘You got that right.’ ”) She believed that bouts of heavy drinking and depression during her years as David stemmed from not being true to herself.

In the next years, Ms. Buechner largely disappeared from public view, though not by choice. David had done 50 concerts a year — performing with philharmonic orchestras in New York, Philadelphia, Cleveland and San Francisco — but as Sara, she couldn’t get bookings. “Apart from local gigs, from 1998 to 2003, I did three to five concerts a year,” she said. David taught as an adjunct professor at Manhattan School of Music and New York University, but as Sara, seeking a full-time professorship, “I applied 35 places and wouldn’t even get a response. Behind my back, I’d hear, ‘Is it safe to leave him in a room with undergrads?’ ”

She left Manhattan, where she got the wrong sort of attention (“In line at the bank, I hear, ‘You’re the guy living on the sixth floor having a sex change’ ”), and moved to the Bronx, where she was only Sara. She took a job teaching the piano to children at the Amadeus Conservatory in Chappaqua, N.Y. “A nice lady said, ‘Why teach here?’ I lied. I said, ‘I want to teach kids.’ I needed work.” She earned a third of what David had made 10 years earlier.

What I liked about this story was that it showed the professional difficulties Buechner had, but dealt with them in a very matter-of-fact way. We learn that things got better for her when she moved to Canada to be an academic and that she has a wife. It’s a really lovely piece.

Staying in the realm of music, sort of, we also have seen the first interview by Chaz Bono as a male. The interview was on Good Morning, America with Chris Cuomo.  The story was very different from the NYT story, in part because Bono is someone who many have essentially seen grow up.  In discussing his transition–which included a discussion of the physical and medical parts of the transition–Bono said that he knew he wouldn’t be able to do this in private, which made the decision to transition more difficult.

Cuomo’s questions were respectful, without being exploitive, a difficult balance to make during breakfast television.

Finally, a great story in D.C.’s MetroWeekly on transgender rights activist Earline Budd.  Budd is a fixture in the local community, but the Q&A format used by Yusef Najafi allowed the reader to get a more in-depth understanding of the Budd and her work.

MW: What led you to start this program?

BUDD: I decided to do it because of my history. I knew, being an ex-offender myself, what services were not being provided in terms of while you’re in jail and when you’re coming home. In 1994, I was released out of federal prison and that’s when I started going to the group called TADD, Transgenders Against Discrimination and Defamation. That group is where I started doing my outreach — then the Department of Health approached me and asked if we wanted to become a nonprofit.

In 1996, we were awarded $20,000 dollars to do capacity building to become a nonprofit organization. Up until ’96, we were a support group of just four or five individuals. Dee Curry was the director of the group and then I took over. Within three years I built the group up to about a 100 members. In terms of what name we should use, we said that most of the people who will be attending are transgender. We talked about despairing health issues that we have around denial, HIV and substance abuse. And then we talked about self-esteem, which is driven by empowerment. And that’s how we got Transgender Health Empowerment, T-H-E.

MW: Do you ever get tired of the work you do?

BUDD: I have gotten tired so many times. I think what keeps me going is that every time I look at someone that walks through the doors, that has a sense of hopelessness, and they’re struggling, I start to think back to how it was for me. And immediately it just hits me: I can’t let them go back out that door with a sense of hopelessness. I want them to leave knowing that there is help. I’m 51 years old, I’m HIV-positive, and when I came up in the latter part of the ’70s and then the ’80s, these services were inconceivable. They were nonexistent. I’m just so happy to be a part of something where we can see that there is success.