Who is Covering the Prop 8 Trial in the LGBT Media?

As the Proposition 8 trial ends its first week–and much of the traditional LGBT media is finally going to press–it’s interesting to look at how the LGBT press is covering the biggest trial yet over same-sex marriage. 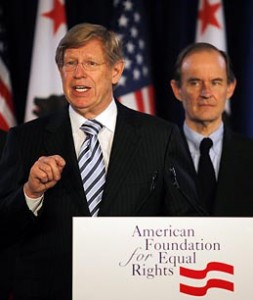 Much of the coverage is being provided by two people, Lisa Keen and Karen Ocamb.  The veteran journalists appear to have divided up much of the LGBT media providing any coverage of the trial.  Ocamb–who blogs at LGBT POV–is providing coverage for Frontiers in Los Angeles (her usual home), but also DC Agenda in Washington, D.C.  Keen, at the Keen News Service, is providing coverage for Bay Windows, OutQ News, MetroWeekly, and Windy City Times.

The Bay Area Reporter has bucked the trend, sending its own reporters–co-blogger Matthew S. Bajko and Cynthia Laird–to cover the trial in their hometown. The Boston-based Edge Network is covering the trial with reporter Roger Brigham, who is based in San Francisco. The Advocate is using its West Coast correspondent Andrew Harmon to provide updates, as well as heavy tweeting.

Some traditional LGBT newspapers are providing limited coverage, at least on their websites.  The Philadelphia Gay News had a story by Jen Coletta mid-week and the Gay City News only had a story on the Supreme Court’s decision, written by Paul Schindler. There was limited coverage in the Dallas Voice, and ProjectQAtlanta.

The challenge for traditional LGBT media is that they are forced to compete with the online world where no one is paying for coverage. While LGBT bloggers are providing extensive coverage of the trial, they are serving as aggregators and piggy-backing on the coverage paid for by traditional media sources. But covering a trial like this costs money and the LGBT media often lacks the resources to devote to paying for coverage.

There is also extensive use of live-blogging and tweets from inside the courtroom.  While this coverage is interesting, it also has its problems.  First, beyond the coverage by the Advocate, none of the blogging is really being done by LGBT journalists.  Instead, we get self-interested advocacy groups–the National Center for Lesbian Rights, the Courage Campaign, American Foundation for Equal Rights–providing much of the play-by-play.