A lot of chatter this week on the demise/future of the LGBT media, linked to a story in the Village Voice’s Queer edition by Michael Lavers. He covers a lot of ground that we’ve covered at the blog, but he makes a number of interesting observations.  For instance: 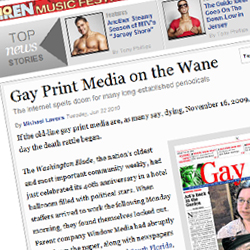 Making things even harder for gay media—new and old—is the not-unpleasant problem of continuous and thorough examination of LGBT issues in big media like The New York Times, the Washington Post, and the Voice. Their coverage threatens to make already-threatened gay community weeklies, with their much more limited resources, redundant. Consider this: The photo that caught notorious professional homophobe George Alan Rekers with a male escort at an airport two months ago wasn’t taken for a gay paper, but for the Voice’s sister paper, Miami New Times.

This is one of those “good problems” to have, although I think there are many who would question how good the coverage is of the LGBT community at the WaPo and NYT. There is no doubt, however, that LGBT issues are being covered, but the question is how well and to what extent.

The Voice story has spawned other conversation, including how the LGBT press can learn from the problems of the traditional press and become more hybrid. It also produced some interesting analysis by Matt Comer at InterstateQ, who is also an editor at QNotes, an LGBT publication in the Carolinas.

In the office, my publisher and I spend a great deal of time talking about ways to grow the newspaper and respond to the changes we see in our local marketplace. He and I are both concerned about what the future might bring. As should be expected, his perspective — as the man who has owned the paper for more than two decades and nursed it into its present form today — is quite different from mine: that of a younger person who has never known or experienced what it was like to depend almost solely on print products for in-depth news, analysis and commentary. (For example, even though I work at a print newspaper I have never personally chosen to subscribe to any print product.)

The drastic difference in our life experiences leads to occasional differences of opinion, and every now and then a good clash. But, I believe our company has been better for it. In my publisher’s mind, the newspaper — the print product — comes first. Financially, that’s where the money is. Online advertising doesn’t even come close to covering costs. Business-wise, his focus on the print product makes sense, but it doesn’t factor in our consumers’ changing habits, desires or needs. Further, without innovation relying on the print product alone won’t always create a positive cash flow. After what seemed like months and months of discussion destined to never end, we rose to the challenge and we’ve managed to take a newer, fresher look at how our two products — yes, two products — now work with each other to build a better brand, reach a bigger audience and increase advertising revenues.