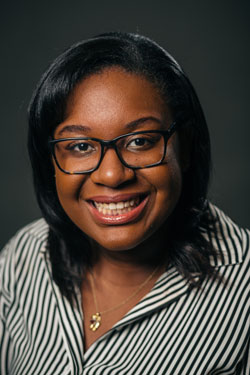 NLGJA is excited to announce the newest addition to the NLGJA Staff, Sachelle Brooks. She will fill the role of Administrative Assistant with a focus on member outreach.

Brooks first served as the Communications Intern for NLGJA through a program with The Washington Center. Born in New York and raised in New Jersey she jokes it allowed her to experience the “best of both worlds.”

She is a recent graduate from Fairleigh Dickinson University at Madison, NJ, where she pursued a major in Communications and minors in Public Relations and Political Communications. She continues to pursue a career in public relations specialized in crisis management.

During her time as an intern, she aided in communication efforts for New Ways Atlanta, the National Convention & LGBT Media Summit, the Excellence in Journalism Awards and weekly newsletter articles. Brooks attended and worked the New York Benefit: Headlines & Headliners this March.

“I have always had a passion for advocacy and living in a highly connected world, media plays an essential role,” said Brooks. “After interning with NLGJA, I was exposed to the day-to-day efforts that it takes in aiding media professionals such as journalists to make their impact. I am honored to be joining the staff, where I can put my efforts into an organization I have become so very fond of.”