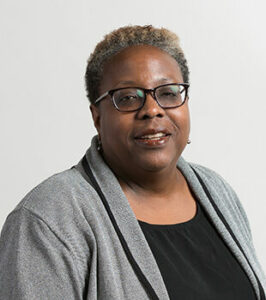 Michelle Johnson is one of the 2022 inductees into the LGBTQ Journalists Hall of Fame. Johnson, a former editor for the Boston Globe, was part of the team that launched the Globe’s award-winning regional website, Boston.com. Prior to moving into online media she was an editor for the Metro, National, Foreign and Business sections of the newspaper. She currently serves as an associate professor of the practice in Boston University’s Journalism department. Johnson served as assistant political editor, senior assistant business editor, senior assistant night editor, and for many years as a copy editor, before being named the first editorial manager of boston.com in 1995. Johnson was awarded a Knight Fellowship to study for a year at Stanford University in 1993. She has received awards for excellence from the National Association of Black Journalists (NABJ) and NLGJA: The National Lesbian and Gay Journalists Association. For more than 15 years, Johnson has taught numerous multimedia workshops for both professional journalists from news organizations around the country and student training programs for a variety of professional journalism organizations. Johnson’s work and teaching have taken her to newsrooms, schools and programs engaged in training professional journalists and journalism students nationwide and internationally. She currently serves as an associate professor of the practice in Boston University’s Journalism departme