First, a confession. I don’t watch American Idol and would be hard pressed to pick Adam Lambert out of a crowd at Starbucks. But I know that everyone has assumed he was gay since the first moment he appeared on the television screen with his painted fingernails and glam rock persona.

In the upcoming issue of Rolling Stone, he has now confirmed he’s gay and the issue can now be put to rest.

“Right after the finale, I almost started talking about it to the reporters, but I thought, ‘I’m going to wait for Rolling Stone, that will be cooler,’ ” he tells us. “I didn’t want the Clay Aiken thing and the celebrity-magazine bullshit. I need to be able to explain myself in context.

“I’m proud of my sexuality,” Lambert adds. “I embrace it. It’s just another part of me.” Ultimately, however Lambert tells RS contributor Vanessa Grigoriadis that there are other parts of his life that he’s trying to keep front and center. “I’m trying to be a singer, not a civil rights leader,” he says. 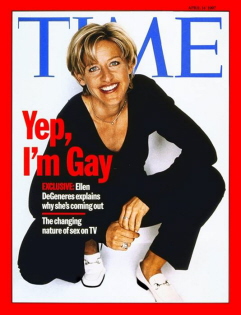 Amid the “Is he or isn’t he” speculation during American Idol‘s last run, the New York Times took on the issue of why everyone is afraid to ask . . . of course, they didn’t ask either.  Still, there was some interesting analysis.

Leave aside for a moment the answer to such a question, or even whether Mr. Lambert is gay. He may be. He may not. Fox, which owns “Idol,” is not saying; neither is the contestant himself.

What is notable is the intensity of the insinuations caroming around the Internet and in certain corners of the mainstream press — that and the fact that even asking whether a gay contestant can win a broadly popular reality show, whose survivors are selected by public acclaim, seems increasingly anachronistic in light of decisions in Iowa and Vermont to extend marriage rights to gay men and lesbians.

The underlying theory was concern that “middle America” could not handle it. Beyond the coastal arrogance–Iowa has same-sex marriage, California doesn’t–is also the discomfort even LGBT people (and journalists) have about the implications of such a disclosure. The implications of “outing” a glam rock singer and just asking him if he dates guys is just too great, the press decides. But why? If the press has no trouble forcing a conservative politician out of the closet, why are they so protective of a glam rock performer on American Idol?