After I posted the news that Judge Walker had been “outed” by the San Francisco Chronicle, I saw a tweet from Lawdork blogger Chris Geidner where he asked whether this was really an “outing” since everyone appeared to know that Walker was gay. I tweeted back: “I’m not even sure I know what the definition of “outing” is anymore.” 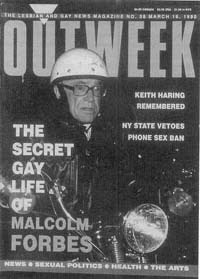 When most people think of “outing,” they are likely thinking of the kind of thing done by Michelangelo Signorile, Michael Petrelis, and Michael Rogers where the decision to “out” someone who isn’t openly gay is done for political purposes.  Those who are “outed” generally have an anti-gay record or are viewed as hostile to the gay community. That approach has even extended, more recently, to gay Catholic priests.

But Judge Walker doesn’t really fall into this category.  He appears to live an openly gay life, he doesn’t have an anti-gay record, and he doesn’t appear to go out of his way to suggest he’s not gay. So is reporting the fact that everyone knows he is gay really an “outing”?

The NLGJA stylebook defines “outing” as: “Publicly revealing the sexual orientation or gender identity of an individual who has chosen to keep that information private. Also a verb: The magazine outed the senator in a front-page story.”

There are many people in public life–athletes, politicians, newscasters, entertainers, pundits–who live inside a “glass closet” where they don’t actively pretend to be straight and may actually live openly gay lives.  They just aren’t openly gay lives to the public outside of their inner circle.

In some ways, those people are even more difficult to report on.  While there are ethical arguments not to “out” people when the goal is political, that line doesn’t exist for people who haven’t held a press conference to announce they are gay and don’t answer questions from reporters about being gay, yet live lives as LGBT people. But we are loathe to report that a television personality has a boyfriend or a singer/actress goes to lesbian bars with her girlfriend or that the progressive politician isn’t just a single woman who can’t find a man.

So why is it that we don’t report this information, outside of the gossip pages?  And what happens when the gossip page story becomes a bigger news story? While the fact that a judge overseeing a high profile trial involving same-sex marriage is allegedly gay is newsworthy, when is a glass closeted person’s orientation not newsworthy?

There is an argument that it’s not news, except when it is “news.” There’s no reason to mention a television personality has a boyfriend unless that somehow has a news angle or it occurs in a public situation.  If an actress/singer is appearing in a new movie, is the fact that she has a girlfriend “news”?  What if she always shows up to premiers and award shows alone?  What if she shows up with a man?