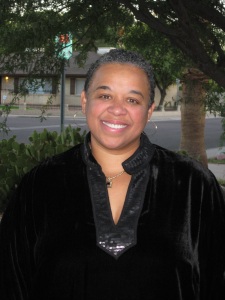 I think that it’s somewhat ironic that the discussion about Unity’s name should happen on the same weekend that Major League Baseball celebrated Jackie Robinson Day. All the players on the field, no matter their ethnicity or sexual orientation wore the number 42 in unity. They celebrated Robinson’s cultural impact not only on the field, but off the field as well.

They celebrated a shift in cultural appreciation, and while some might not have been happy at the idea of an African American on the field, it was a necessary change. The time was right.

It’s also ironic that these talks about Unity are happening as we celebrate the 40th anniversary of the passage of Title IX, the 1972 anti-discrimination legislation that led to equal female participation in high school and college sports. This change in law had a huge impact for all women, no matter what their ethnicity. It also had a huge impact on men.

As a matter of fact, I was the first young girl at George Air Force Base in California to take advantage of this new ruling when I played for the boy’s baseball team. Not everyone was happy with the decision to allow girls into the all male clubhouse, but it eventually opened up the sports world to women — a right all women and men enjoy today. The time was right.

And the time was right this weekend to make the decision to change the name of Unity: Journalists of Color back to its original name: Unity.

This too was not an easy decision for everyone. The diversity journalism organization began in 1994 with its inaugural convention, called Unity 94. The convention was about inclusion, an opportunity to talk frankly about the lack of diversity in our newsrooms, and the need for a push to get more representation of diversity at all levels.

It was a chance for everyone, not just members of the four alliance groups at the time, AAJA, NAJA, NAHJ and NABJ, but everyone was welcome to come and learn and support the cause. The general vibe at that convention was one of Unity, one that said no matter who you are, if you are here, then you are part of this unified effort to celebrate diversity and help fix an imbalance in the newsroom.  As far as I was concerned, Unity stood for a unified group of people fighting for the same cause: Diversity.

I have attended every one of the conventions since, not always agreeing with decisions that were made, but always showing up at the table. I did not agree with adding the line, “Journalists of Color” to the name in 2004. I felt it was not as inclusive as the first conventions, and might make some people uncomfortable and excluded if not a member of one of the alliance groups.

I felt that adding those three words set up a boundary, excluding some journalists… the opposite of  Unity. But I still felt it was important that I show up at the 2004 and 2008 conventions, because my face and my words were important for the members of the convention to see and hear.

My goal was that I had a responsibility to voice my opinion at the conventions amongst my colleagues even if it might not be the most popular. I was not going to walk away, I was going to still be there, trying to make sure they heard what I felt.  I am an African American journalist, and I am also a lesbian. I did not want to be put into the position of choosing between the two. I wanted a group that supported all of me, as well as my partner, who happens to be a white journalist.

And that’s why I felt it was important this past August to speak up at the NLGJA convention in Philadelphia about the idea of joining Unity. I know there were some members who were initially against it, who had heard rumors over the years that maybe NLGJA members were not welcomed by some. There were people holding on to some of that hurt from years before.

But, I also know that this was something that Roy Aarons, one of our founders was passionate about seeing happen. I stood up in that room and spoke from the heart about the importance of being in the room, of being at the table, and of putting our feelings aside and looking at the rest of Unity’s members as our brothers and sisters, fighting for some of the same rights NLGJA fights for in our newsrooms and in our coverage.

I knew not everyone in that room in Philadelphia agreed with what I was saying, but it needed to be said, and we, as an organization, needed to trust, and move forward.

I was so proud of everyone for putting aside any personal feelings, and trusting that the board would make decisions in the best interests of our members.

We decided to officially join Unity, and for the past six months I have to say we have been embraced as the newest alliance partner. We have had wonderful conversations, and learned a lot from each other as we prepared for the next convention, Unity 2012.

But, some of us also knew something needed to happen to reflect some of the changes within Unity as we head toward our convention. We needed to get back to Unity’s original spirit, the legacy of including everyone and excluding no one. We needed to get back to our roots, back to the idea that this is a group fighting for diversity on all levels, and everyone who wants to join that fight is wanted, needed, and welcomed.

The discussion to change the name was passionate at times, heated at times, emotional at times.

The whole time the discussion is going on, I kept remembering a quote I had heard attributed to Maya Angelou that said, “The need for change bulldozed a road down the center of my mind”. We were doing some bulldozing in that room. But it was necessary.

I will wrap this up by saying that I am so thankful and proud of our alliance members who voted in favor of the name change.

David Steinberg, the President of NLGJA so eloquently described the importance of this weekend’s vote. I loved what he had to say about why this is such a positive step forward: “While recognizing UNITY’s historic mission of encouraging better representation of journalists of color in the newsroom and improving coverage of the communities those journalists come from, the new name reflects the evolution of the alliance which now includes NLGJA.”

To my brothers and sisters on the Unity board who do not agree with the decision, I can only say that one day I hope you can appreciate that this was not a decision that was made without careful thought and discussion.

I was recently reading a story on the AAJA web site concerning their convention in 2010 where they were celebrating nearly three decades of their existence. And I read a quote from one of the founding members, which I think says it all. Bill Sing, an L.A. Times reporter said, “You’ve got to look to the future. There’s lessons from the past, but you take that and you look forward.”

I believe that this move by the Unity board this weekend is about looking forward, as a Unified group, moving forward in Unity. I am incredibly excited about this upcoming convention and I hope everyone else is as well.

I am a member of NLGJA and Unity, and I am very proud of that, especially today. It was time.

Sue Green is a guest contributor to the Re:Act Blog. After working for more than two decades in the industry, she is now the Broadcast Director of the Cronkite News Service at Arizona State University and serves on both the national board of the National Lesbian & Gay Journalists Association and the board of UNITY Journalists.